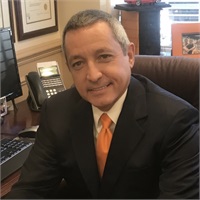 Vincent J. Camarda is a CERTIFIED FINANCIAL PLANNER™. Mr. Camarda has been helping people pursue their financial goals since 1994.

Over the years, Mr. Camarda’s business grew by referrals from his clients. By 2003, he was the #2 producing advisor in the country with American Express Financial Advisors. His accomplishments in building a referral-based business set him apart at American Express, having received the greatest number of referrals as compared to the other 13,000 advisors across the country.

In 2005, Mr. Camarda moved on from American Express and established his own independent investment management firm.

Mr. Camarda received his B.B.A in Accounting from Hofstra University. In addition, he holds FINRA Series 7, 63, 66 securities registrations. He is also a licensed insurance agent. Mr. Camarda lives on Long Island and has three children Andrew, Gregory, and Morgan who are the most important part of his life.